What's on your mind?

I know that you aren’t the mod of this wiki, but please take down the post below this one. 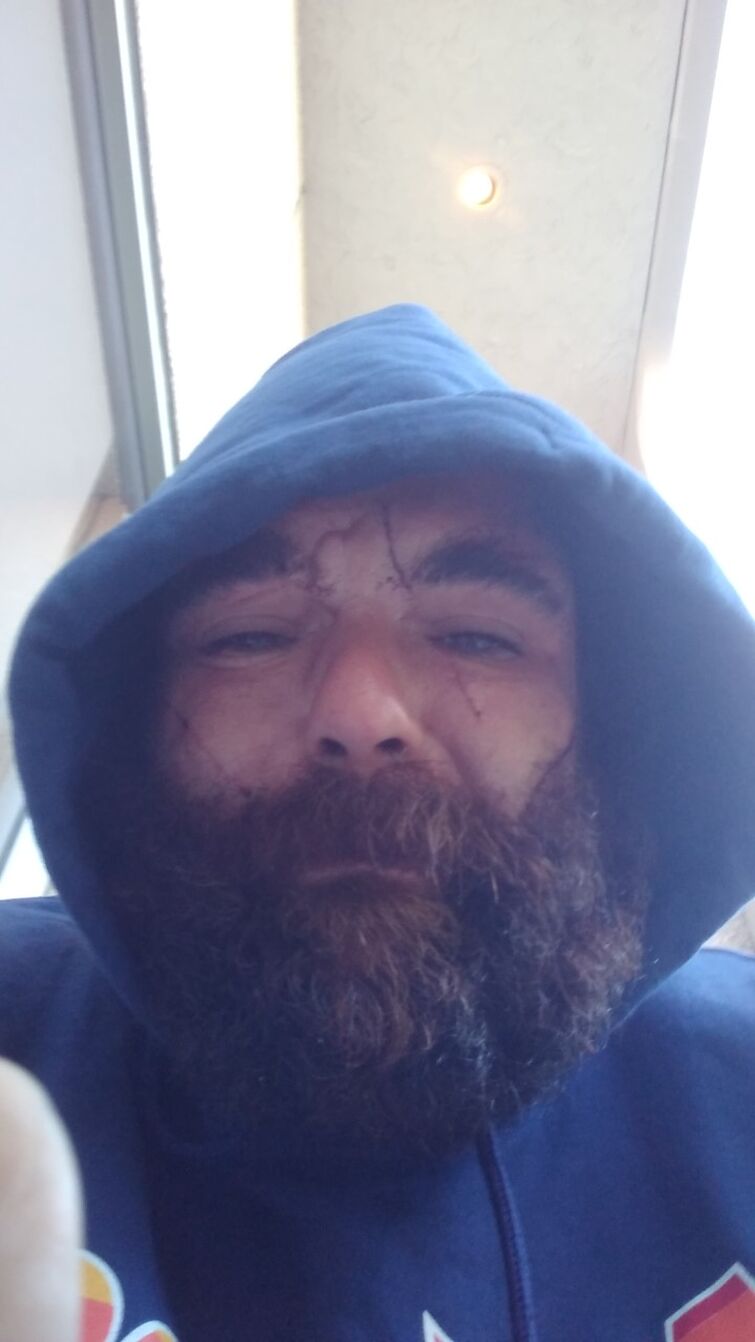 Remember you sorry mother f****** you are the sorryest people ever

There is no Enola Holmes wiki, none that I know of. I posted my comment because I don't think that any such wiki belongs in Baker Street. After all, Enola does not appear in any Sherlock books or stories.

You may be interested that Ms. Springer, who may have completed an eighth book by now, has posted a very short story. Folks may access it by supplying their e-mail addresses and ages to her publisher (which I don't expect to burden them with messages, so I did).

Enola Holmes and the Boy in Buttons Short Story GiveawayMacmillan

Is for academic research! :D

What kind of fan are you? | FandomIt will only take you a minute to answer this…bakerstreet.fandom.com

Vanessa of the orphanage murder

(iPhone ringing, SHERLOCK IS ASLEEP IN HIS BED. JOHN IN NOT AWAke YET)

(picks up) Lestrade, you know perfectly well that I don’t need wake up calls.

(Through phone) Sherlock you know perfectly well that I do know. It’s a case.

Fine, I’ll give you a minute. Interest me.

So this peculiar case, is different. There’s murder, but we know who’s the killer. It’s just that she fled before we came. She left a pretty clear message that she was the murderer though. Carved her bloody name into the Hollow Point bullet. Seemed like she was emotionally involved with the victim, too. Right next to her name was, “For you especially, Kevin”. Or “I used to like you, Sally.” You know, looked like classic movie revenge.

And killed half the orphanage. You hear me. Child murder. And from the information we’re getting, not only the victims are children, but the murderer is probably…A child too.

Time to give me a minute. Well, more like twenty. Wait, and don’t you dare move anything!

I never do, I have critical thinking as well, you know.

(John runs after Sherlock, breathless, and still doesn’t know what’s happening. Sherlock dragged him out of bed and without explanation dragged him here. Finally, John sees Sherlock slow down in front of an orphanage.)

(In front of the orphanage is a small mountain of bodies. At least thirteen kids were lying lifeless, and huge wounds on their chests suggested a powerful bullet. John cringed a little. This by far was one of the most bloody murders he had ever seen.)

So these are the victims, huh? Poor children.

Yeah. We only removed the bullets. Seems like a pretty cruel prank to do to a kid. By another person.

(busing examining bodies) Mmm, yes, quite obvious hollow point. Would you look at that nasty piece of flesh torn out…Let me see these bullets.

(hands him a plastic zip up bag with bullets inside) All here. I know this is a important matter, and everyone’s worried to death, but these messages she gives are quite fun to read.

“Shame that you chose to betray, Emily—Vanessa Johnson”. “Love you, Carly”.

Ha, interesting indeed. Carved in by a knife, obviously, had a nice hand that isn’t shaky. Bold of her to carve her own name on these bullets. Found fingerprints?

Well this is getting rather fun. I trust you’ve sent your men looking for her?

Precisely. Been looking all over town for the kid.

It’s a kid? You’re kidding me.

It’s true. Looked at the files. She’s only twelve, can you believe it?

Worse than Moriarty, and that’s something.

(In a nearby alley)

Sorry there’s a bug here! I forgot, I meant “THE WOMAN” 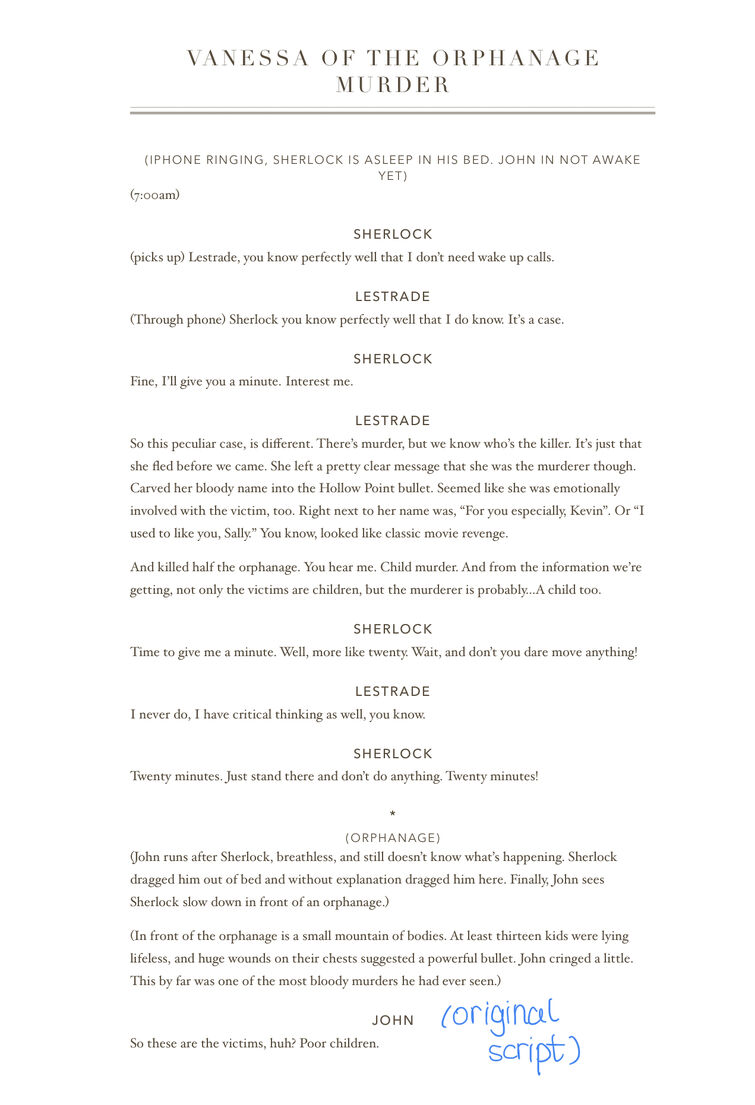 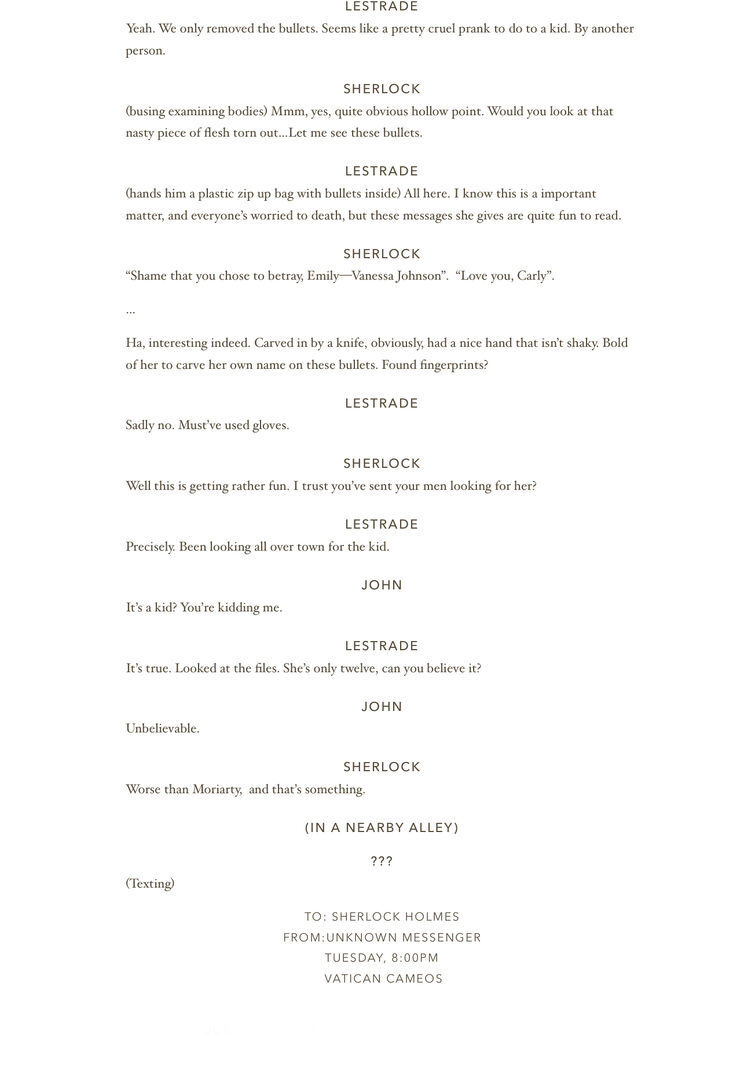 I am a widow and Sherlock fan! I’d love to discuss things with you! (Especially Sherlock as not many people are active!).

English is my first language (I can speak fluent Russian- just a ridiculous coincidence, I’m not a window..I don’t think. And French but would prefer to keep it in english!

Please tag me on the marvel wiki if you’d like to! I don’t actively comment there as to avoids spoilers (I’m watching them in release order and am on Infinity war. The next one is ant man and the wasp. Obviously black widow wasn’t in order but she’s too awsome to be in order)

This is a non-canon Roleplay.

Some parts will not be canon, like new characters and plots.

Please be wary of this and do not Roleplay other peoples’ characters.

How does everyone want to do this? There are many options like we write POVS (points of view) from each characters perspective. Or everyone can go-with-the-flow which normally works better. I’d rather do that one but any suggestions or comments leave them below!

She’s on good terms with her parents and John. Doesn’t really speak to sister 1. John hasn’t seen her in real life for 4 years. She’s treated as the baby of the family.

So first I just want to say I've always been a fan of the stories. When I was six, I read A Study In Pink. Well, technically, I read a little, got scared to death and had nightmares at night and read again a little in the morning again. I can't possibly describe the longest two weeks of my life.

Then around eight, where I got slightly more mature, I finished The adventures of Sherlock Holmes. Boy, I thought my life was over. No more Sherlock...

Then at eleven( which is now) I found out The return of Sherlock Holmes. I read it, LOVED it, and found out about BBC Sherlock.

Now THAT changed my life.

I watched season two first, mainly because I couldn't find season one for some reason, and Irene Adler( Laura Pulver) just whacked into my face like a wrecking ball. OH. MY. FRICK'IN. GOD.

I never really thought of Irene Adler that much in the stories.

But BBC Irene---that was my obsession after maleficent and black widow.

I finished it and as you may know, adlock was the only thing I knew.

I finished all the seasons around last month and WOW.

I totally loved it.

I now ship adlock as a couple and Johnlock as besties, and I'm a little new to Sherlock, so I hope I can find some Sherlock friends around here!

(and who else loves pretending they're as smart as Sherlock in front of their friends?)

Baker Street Wiki really isn't the place for Enola Holmes, primarily because she doesn't exist within the Sherlock Holmes canon.

The thing is, to the initial series of six books written by Nancy Springer, which created the character Enola (and which relegated Sherlock and Mycroft to supporting but adversarial roles), a seventh novel (ENOLA HOLMES AND THE BLACK BARROUCHE) has been added, and it's likely that Ms. Springer may create additional adventures for Sherlock's young sister.

It's worth noting that the new book begins with a 12-page prologue written in Sherlock's voice (the Sherlock of "Enola Holmes") which not only summarizes the adventures contained in the first six books, but also refers to a scene which appeared in the film.

The film "Enola Holmes", while borrowing the story of the first Springer book, THE CASE OF THE MISSING MARQUESS, drew items and even scenes from the other five. It also made significant changes to the basic elements of that first book (introducing Enola as 16, not 14, and completely changing the young Tewkesbury, who had been a boy of 12, and a boy whose mother had kept dressed as Little Lord Fauntleroy).

A sequel (tentatively referred to as "Enola Holmes 2") began filming this month. It's unknown whether its screenplay will borrow its basic plot from any of the remaining five of the original six books, but we should expect the basic characters to continue as they were presented in the first film.

Folks have speculated that the sequel will follow the arrangement of the original six books, and turn out to be quite like the second one, THE CASE OF THE LEFT-HANDED LADY, but such speculation assumes that the producers and Netflix have committed to following the original series and planned five films, which is unlikely.

In any event, there doesn't seem to be any location within the Baker Street Wiki where Enola Holmes fans can discuss such developments, or the films and the novels.

Baker Street exists primarily to cover and discuss Sherlock Holmes as Arthur Conan Doyle created the character and his milieu, and the various films and TV programs drawn from that canon. That is obvious from reviewing the Wiki, which concentrates on the changes to Doyle's characters and stories.

Anyone interested in a Roleplay? I just need someone to discuss Sherlock with...

I think I’ll put some memes below... 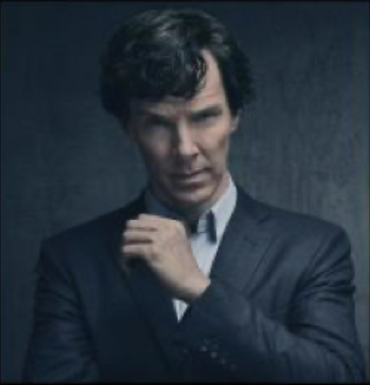 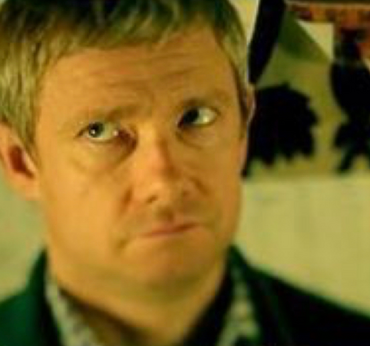 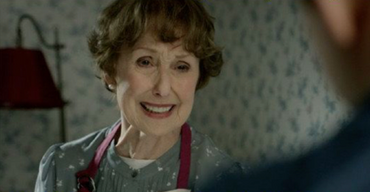 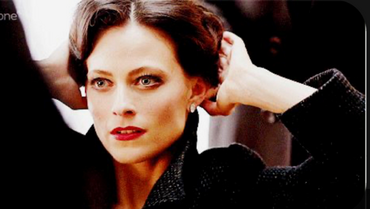 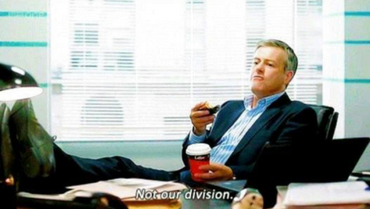 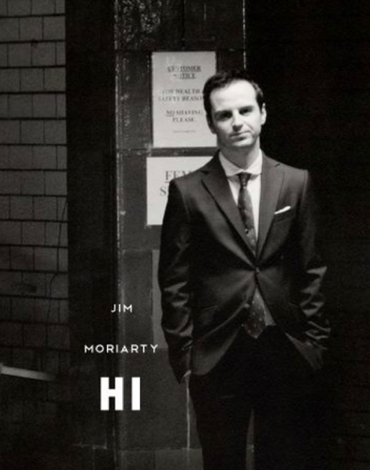 Did you know? In S01E01, Sherlock kissing Mrs. Hudson on the cheek wasn't scripted. Benedict Cumberbatch had known Una Stubbs since he was very young, and it was his reaction on being able to work with someone who was like a mother to him. 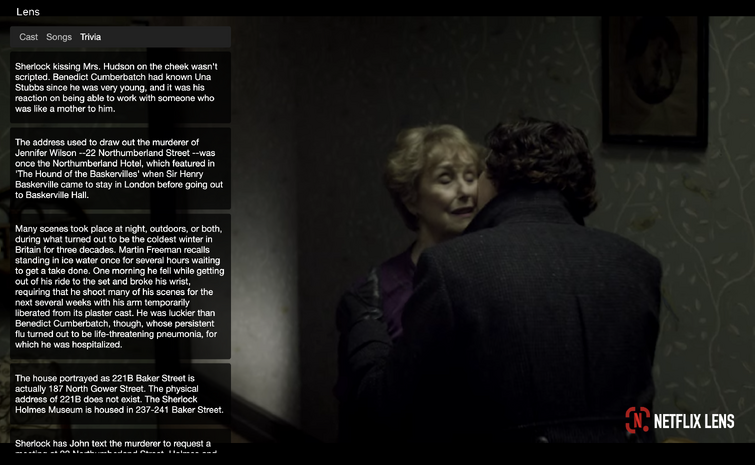 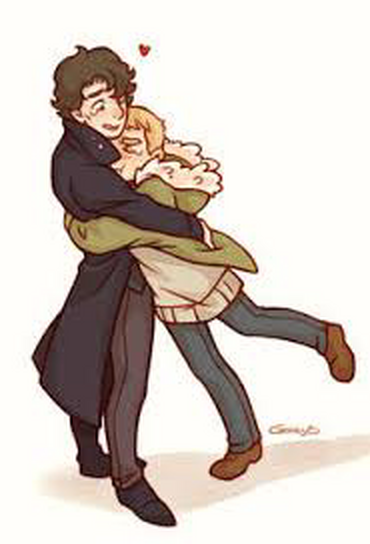 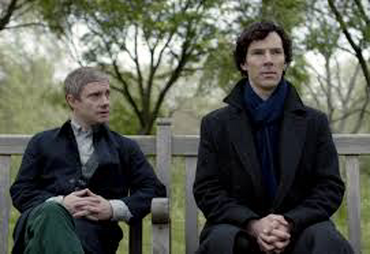 Hey everyone! I'm relatively new to the fandom, I finished watching BBC Sherlock about a month ago, and I'm rewatching it now because it's my favourite TV show! I am absolutely head over heels for Sherl, and I'm constantly making fanart. I love The Lord Of The Rings as well so I'm always drawing, painting and whatnot. I'm going to start reading the ACD books soon, because I've always wanted to and I think I'll understand a lot more of the references in the show when I do. I love Benedict, Martin and Amanda!! Lovely to meet you all

Elementary is the portrayal of Sherlock Holmes's(Johnny Lee Miller) and Joan Watson's(Lucy Liu) life as detectives and their transformations as partners.

One think that surprised me is that 2 of the most iconic Sherlock characters(Watson and Moriarty)are now female.What do you guys think of Elementary?