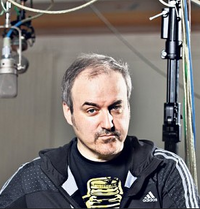 David Arnold (born 23 January, 1962; Luton, Bedfordshire, England) is one of the composers of the soundtrack of Sherlock.

"The way I always start composing is by working out what lies at a show’s heart. In Sherlock, for instance, there’s lots of action, but what’s actually at the core is this relationship between two men. The music always needs to give you access to the emotional aspect of the story."[1]

Retrieved from "https://bakerstreet.fandom.com/wiki/David_Arnold?oldid=38203"
Community content is available under CC-BY-SA unless otherwise noted.