A Scandal in Belgravia

"A Scandal in Belgravia"

"We are in Buckingham Palace, the very heart of the British nation. Sherlock Holmes, put your trousers on!"
―Mycroft Holmes

"A Scandal in Belgravia" is the first episode of the second series of Sherlock. It was first broadcasted on 1 January, 2012 on BBC One.

A case of blackmail threatens to topple the monarchy itself, but soon Sherlock and John discover there is even more to it than that. They find themselves battling international terrorism, rogue CIA agents, and a secret conspiracy involving the British government.

This case, however, will cast a longer shadow on their lives than they could ever imagine, as the great detective begins a long duel of wits with an antagonist as ruthless, original and brilliant as himself: Irene Adler.

Jim Moriarty, whose snipers are aimed at Sherlock Holmes and Dr John Watson, and who has stated his intention to kill them both, is interrupted by a phone call. He leaves, having "received a better offer", letting Sherlock and John return to their flat at 221B Baker Street.

Sherlock Holmes solves a number of cases over the next few weeks, turning down several others because they bore him, including a man claiming his aunt's ashes are not hers and two girls not allowed to see their dead grandfather. Sherlock becomes a minor celebrity following John's blogs about his activities. One day, Sherlock's brother Mycroft has the pair brought to Buckingham Palace with Sherlock in only a sheet for a meeting when they are in middle of solving a case. The case involved the 'murder' of a man in an open field, witnessed by another man whose car had broken down near where the victim died. Mycroft and a Palace official explain that a female member of the royal family has had compromising photographs taken with dominatrix Irene Adler, and that she wishes for them to be retrieved. While Sherlock reviews photos of Adler, who is referred to as "The Woman", she looks at pictures taken of him.

Sherlock and John visit Adler's home, attempting to use deception to get inside. However, Adler is expecting them and after considering possible outfits, she appears fully made-up but completely naked. Sherlock is consequently unable to deduce anything about her. After several rounds of banter between Sherlock and Adler, John sets off the fire alarm and Sherlock is able to determine the location of Adler's safe, where a camera phone containing the compromising photos, as well as other valuable information, is hidden. Several American operatives appear and hold Sherlock, John, and Adler at gunpoint, demanding that Sherlock open the safe. Sherlock deduces the password (Adler's measurements) and opens the safe, which is booby-trapped with a handgun and kills one of the assailants. The duo and Irene disarm the rest of them. Sherlock acquires Adler's camera phone, but she attacks him with a drugged syringe and escapes through a window with the phone. During this time, John is in another room. Back at his apartment, Sherlock has a fevered dream in which he sees Irene returning his coat. He wakes to find that his coat has mysteriously reappeared, and Adler has added her number to his phone. She has added a personalised ringtone of a woman sighing erotically, which sounds whenever Sherlock's telephone receives a text message she has sent.

Six months later, whilst celebrating Christmas, Sherlock learns (via text message) that Adler has sent him the camera phone for safekeeping. Sherlock notifies Mycroft that he will shortly find Adler dead, knowing the value Adler put on her phone. Subsequently, the Holmes brothers arrive at St Bart's morgue where Sherlock identifies Adler's mutilated body. On New Year's Eve, John is contacted by an unnamed woman who has him brought to the abandoned Battersea Power Station. The contact reveals herself to be Irene, not Mycroft as John expected: she faked her own demise to shake pursuers off her trail. John urges her to reveal herself to Sherlock. She initially refuses, but is persuaded. The two then discuss the nature of their respective relationships with Sherlock; during this, Adler's personalised ringtone is heard from an adjacent corridor, revealing Sherlock's presence and his awareness of Adler's survival.

Back in 221B, Sherlock detects the signs of a break-in and finds the American hitmen from Adler's residence holding Mrs Hudson hostage. Sherlock immediately realises that the landlady has been tortured and plans extreme retaliation. During the stand-off, Sherlock demands two of the gunmen go away, leaving him with their leader. While the man frisks him, Sherlock maces the man, knocks him out cold, ties him up, and eventually throws him out the window (apparently several times).

Later on, Sherlock finds Adler sleeping in his bedroom. Irene reveals that she is still being hunted and asks Sherlock to decipher a code she stole from a Ministry of Defence official. He effortlessly cracks the code, revealing it to be an airline seat allocation number. Irene secretly texts the flight number to her contact, Jim Moriarty. He in turn texts Mycroft Holmes, revealing that he is now aware of the MoD plot to fool a terrorist cell that was attempting to sabotage the flight. Mycroft is visibly shattered by this development.

Adler's attempts to seduce Sherlock are interrupted by government officials who have come to collect him and deliver him to Heathrow airport. En route there, Sherlock remembers Mycroft mentioning Coventry on the phone and reminisces about the allegations that the British government allowed the Coventry Blitz to happen, so as not to alert the Germans that their military codes had been cracked. There, his suspicions that a similar situation is occurring are confirmed by Mycroft on board the airplane, which has been filled with corpses. The government had decided to fly a 'dummy plane', so as not to alert the saboteurs yet still avoid genuine casualties, which also explains the involvement of US agents. However, as Sherlock has unwittingly helped Irene, and, by extension, Moriarty, crack the code, the scheme is foiled.

Afterwards, the Holmes brothers and Adler sit down, while Adler reveals a list of demands, including protective measures for herself, against the release of further confidential material. Mycroft is helpless; however, at the last moment, Sherlock confronts Adler, deducing the password of her camera phone. Despite Adler's cold insistence that Sherlock meant nothing to her, taunting his lack of sexual or romantic experience, he has already concluded she is lying. He points out her dilated pupils and her elevated pulse during moments of intimacy – both indicators of her own attraction to him. He types S-H-E-R into the phone, which reads "I AM S-H-E-R LOCKED". Passing it to his brother, Sherlock walks out, ignoring Adler's pleas for protection. Without the insurance of the information she held, she is unlikely to outrun her enemies.

Some months later, Mycroft informs John that Adler has been beheaded by a terrorist cell in Karachi, but asks him to tell Sherlock instead that she has entered a US witness protection program. Sherlock appears to accept this and asks John to give him Adler's phone. John leaves, while Sherlock re-reads her multiple flirtatious text messages to him. The scene changes to a flashback of Adler's "execution" where Sherlock had infiltrated the cell, disguised as her executioner, and rescued her with seconds to spare.

Back in the present, Sherlock chuckles to himself, puts the phone away and says "The Woman".

Vatican Cameos is a code-phrase used between Sherlock Holmes and Dr John Watson. Sherlock uses it as a warning to indicate that the situation they are in at that moment is similar to one they have encountered before, presumably one where they needed to duck.

Vatican Cameos was used again in "The Sign of Three" when Sherlock says it during his best man speech to warn John about an impending murder. When Mary asks what it means, John tells her it means somebody is going to die.

The phrase is similar to the 'Headless Nun' ploy from the "Unaired Pilot", which appears to mean 'Throw me out (of the restaurant) while I pretend to be drunk'. Judging from Angelo's reaction, this had happened before.

"This is a six. We agreed I would not go out of the flat for anything less than a seven."
"We did we agree on that?
"Last weekend."
"I was gone last weekend. Do you carry on talking when I leave?"
"I don't know; how often are you gone?"
―Sherlock and John video chat
"What are we doing here, Sherlock?"
"No idea."
"Here to see the Queen?"
(Mycroft walks in the room)
"Oh, apparently yes."
(Sherlock and John burst out laughing)"
―John and Sherlock wonder why they're in Buckingham Palace, then crack a joke about Mycroft
"Is it too much to hope for you two to act like grown ups?"
"We solve crimes, I blog about it and he forgets his pants. I wouldn't hold out too much hope."
―Mycroft and John
"You know what the problem with a disguise is, Mr. Holmes? No matter how hard you try, it's always a self-portrait."
"You think I'm a vicar with a bleeding face?"
"NO. I think you're damaged, delusional and believe in a higher power. Quite obviously yourself."
―Irene and Sherlock banter
"Upon hearing a fire alarm, a mother would look towards her child. Thank you. (Reveals a hidden safe) Really hope you don't have a baby in here. You really should were gloves on when using these; heaviest oil deposit is on the first key, which is a 2. Can't be a your birthday. No offense, but clearly you were born in the 80s."
"I'd tell you the code right now. As a matter of fact, I already have. Think.""
―Sherlock and Irene
"Brainy's the new sexy."
―Irene Adler
"You know, I was wrong about him; he did know where to look."
"What are you talking about?"
"Should I tell him?"
(Drugged, Sherlock gives a look)
"My measurements. "
―Irene reveals how Sherlock figured out the code to her safe to John
"John, we have a client."
"What? In your bedroom? Oh..."
―Sherlock and John find Irene has returned

"This is your heart, and you should never let it rule your head."
―Sherlock deciphers the passcode on Irene's camera phone, after deducing her love for him

"My brother has the mind of a scholar, yet he elects to be a detective. Well, as things go, it's an improvement; initially, he wanted to be a pirate."
―Mycroft

"Hated her in the end. Wouldn't even call her by name. Just "The Woman"."
"Is that loathing? Or a salute? "The Woman?" The one woman that actually mattered?"
―John thinks Sherlock detests Irene, while Mycroft thinks his brother truly felt something for her 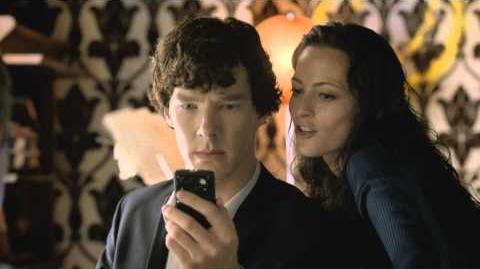 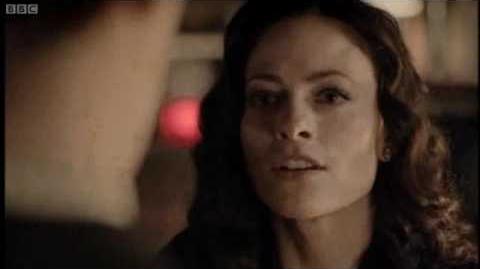 Steven Moffat & Mark Gatiss talk about 'A Scandal in Belgravia'

“You wearing any pants?” -John Watson to Sherlock Holmes 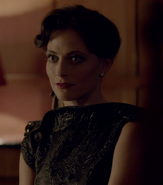