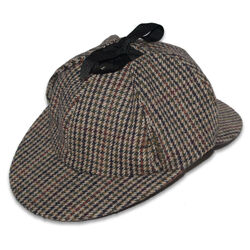 A deerstalker is a type of hat that is typically worn in rural areas, often for hunting, especially deer stalking. Because of the hat's popular association with Sherlock Holmes, it is also a stereotypical hat of a detective.

Holmes was first seen wearing a deerstalker in Sidney Paget's illustration in The Boscombe Valley Mystery, although Sir Arthur Conan Doyle never wrote Holmes as wearing one specifically, though he did describe him as wearing a "close-fitting cloth cap" and in Silver Blaze as wearing "his ear-flapped travelling cap". The idea of Holmes wearing the countryside hat in his city-based stories, as many have depicted, is unlikely, as Holmes is known to be fashionably aware and would never commit such a fashion faux pas.

The deerstalker cap helped Sherlock Holmes to become instantly recognisable in popular culture. The hat also appears in many adaptations in order to identify Holmes. There are often re-imaginings of how the hat came to be famous;

Some film makers make the decision not to include the image to avoid their version of Holmes resembling others'. For example, Guy Ritchie personally decided not to include the deerstalker in his Sherlock Holmes film, joking that only one person in history ever wore that hat.

Retrieved from "https://bakerstreet.fandom.com/wiki/Deerstalker?oldid=57255"
Community content is available under CC-BY-SA unless otherwise noted.