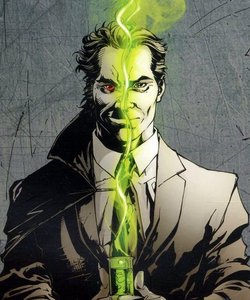 Doctor Jekyll and his violent alter ego Mister Hyde are characters originally from Robert Louis Stevenson's "Strange Case of Dr Jekyll and Mr Hyde", the classic 1886 tale of science gone amok and the dark side to human nature. This bifurcated soul has become one of the iconic characters of literature, both horror and science fiction. There have been movies, comics, a television miniseries, a Broadway Musical, and so on since the story debuted.

As with many such stories, especially the nature of Jekyll and Hyde, and the initial mysteries surrounding the 'relationship' between the two... some writers have brought the troubled doctor up against the Master Detective.

"Doctor Jekyll and Mr Holmes" is 1980 story written by Loren D. Estleman that deals with Holmes investigating strange events surrounding the disappearance of young Doctor Jekyll and what this has to do with the evil Mr Hyde. Like such stories before it and since, treated as one of the many 'unpublished' stories kept safely in Watson's strongbox.

"Doctor Jekyll and Mr Holmes" is a comic story by Steven Philip Jones and renowned Holmes artist Seppo Makinen, (Scarlet in Gaslight, Case of Blind Fear, etc.) dealing with Holmes being approached by Gabriel Utterson, a loyal friend of Doctor Henry Jekyll, to enlist the detective's aid in making sense of a bizarre series of inconsistencies he's discovered concerning the good doctor and how it all somehow relates to some thuggish brute named Edward Hyde.

"Victorian Undead Special: Sherlock Holmes vs. Jekyll and Hyde" is the sequel to Victorian Undead, dealing in the immediate aftermath of the zombie outbreak. As Sherlock and Watson try to rebuild their lives, a string of brutal murders leads them to one Doctor Jekyll.

While he doesn't interact directly with Holmes, Jekyll and Hyde take part in the events of "League of Extraordinary Gentlemen" which brings them into contact with Mycroft Holmes and indirectly with Professor Moriarty through the events of the first two stories.

Retrieved from "https://bakerstreet.fandom.com/wiki/Doctor_Jekyll_and_Mister_Hyde?oldid=56266"
Community content is available under CC-BY-SA unless otherwise noted.