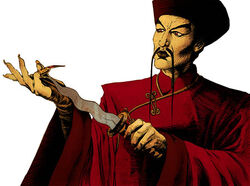 Fu Manchu first appears in a series of novels by British author Sax Rohmer, the first of which, The Mystery of Dr Fu-Manchu (aka: "The Insidious Dr Fu-Manchu" in the US), was published in 1913.

He is of the most feared (and often controversial) characters to come out during the early years of the 20th century. Fu Manchu, the 'Devil Doctor', has terrorized the world of literature for decades since his initial appearance in Sax Rohmer's books. He has directed his wrath, and dreams of conquest, against the Western World due to (according to him at least) the long and tumultuous history of foreign influence and intervention in his native land.

The brilliant mastermind of a vast criminal network (the Si-Fan) made up of various agents and assassins culled from every corner of the global underworld. Despite his aggressive ways, the good Doctor despises guns and explosives, having a preference for poisons (either manufactured or from nature itself) and other ancient/silent forms of murder.

His chief nemesis is Sir Denis Nayland Smith (an ex-colonial commissioner turned Scotland Yard agent) and his own companion, Dr Petrie (a sort of Holmes/Watson duo of the series). Smith was largely the brawn to match Manchu's brains, and after many battles the two began to have begrudging respect for each other despite their differences.

Despite the popularity these two have shared (at various points in time) over the decades, Sherlock Holmes has rarely clashed with the Devil Doctor.

The most well-known example is Ten Years Beyond Baker Street published in 1984 and written by Cay Van Ash. Taking place during an apparent chronological gap between "Hand of Fu Manchu" and His Last Bow (both published at the same time in 1917), where Dr Petrie turns to a retired Holmes to help him when Denis Nayland Smith is kidnapped by Fu Manchu's agents.

Then there's the unpublished/lost novel The League of Dragons by George Alec Effinger that would've been set during Holmes' university days, and an encounter he had with Fu Manchu. Chapters of this unauthorized book have been published in various Holmes anthologies since the 90's (Sherlock Holmes in Orbit and My Sherlock Holmes for example).

Then there's 2005's Elemental, querido Chaplin by Rafael Marin, a Spanish-language story that apparently presents itself as an unpublished manuscript in which actor Charlie Chaplin tells of how, as a poor youth in London, he helped Sherlock take on Fu Manchu.

Despite this small list of examples, the number of times that the Holmes-Manchu universes have crossed over/intersected doesn't end there.

In recent times the character of Fu Manchu has been considered by many to be a racist stereotype.[1]

Community content is available under CC-BY-SA unless otherwise noted.
Advertisement