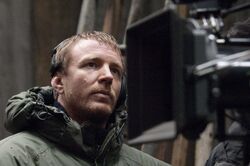 Ritchie has been a screenwriter, film director and producer and is probably best known for directing Lock, Stock and Two Smoking Barrels, Snatch, Swept Away, Revolver, RocknRolla, The Man from U.N.C.L.E., King Arthur: Legend of the Sword and the live-action remake of Disney's Aladdin. Despite all his cinematic work, however, he is probably at least as famous for being Madonna's ex-husband.

Retrieved from "https://bakerstreet.fandom.com/wiki/Guy_Ritchie?oldid=59907"
Community content is available under CC-BY-SA unless otherwise noted.