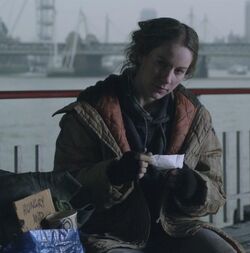 The Homeless network is a collective of "street people" in London set up by Sherlock Holmes. He uses this network as a source of information on cases he is working on, by paying them for the information.

Sherlock stops the cab he is in in order to give £50, wrapped up with a note, to a homeless woman.[1] Later on he sees the woman again when she gives him a note which reveals the location of The Golem.

Sherlock also uses his homeless network again in order to narrow down the location where the kidnapper was holding the children, by sending them out all across London looking for where certain chemicals and substances were present.[2] They text him several locations which he narrows down to the correct one. He brags to Lestrade that his network can find the location faster than the police, which they do manage to do.

Retrieved from "https://bakerstreet.fandom.com/wiki/Homeless_Network?oldid=43800"
Community content is available under CC-BY-SA unless otherwise noted.