This article is for Sir Arthur Conan Doyle's character. For other versions of the character see Versions of Mary Watson.

Mary Watson (née Morstan) was the wife of Dr John Watson. She is first introduced in The Sign of Four and Watson refers to her in a number of the stories. While she is generally not involved in the main action of most stories, she is one of the central and main character in The Sign of Four.

Mary's father, Arthur Morstan, was an officer of an Indian regiment. Her mother died when she was young, and Captain Morstan sent Mary back to Britain to be educated. As she had no family in the country, Mary was placed in a boarding school in Edinburgh, where she remained until she was seventeen.

At the end 1878, Captain Morstan received twelve months' leave and returned to England to see his daughter. He asked Mary to meet him in London. However, when she reached his hotel she learned that he had not been seen since the previous night; in fact, Captain Morstan was never seen again. His disappearance would prove central to the mystery in The Sign of Four. Mary Morstan is Holmes' client in this story, and Watson describes her at their first meeting this way:

"She was blonde young lady, small, dainty, well gloved, and dressed in the most perfect taste. Her face had neither regularity of feature nor beauty of complexion, but her expression was sweet and amiable, and her large blue eyes were singularly spiritual and sympathetic."

Watson and Morstan fall in love during the course of the story. Watson initially hides his feelings for Morstan because she stands to inherit a fortune, and he sees it as improper and unethical to court her in view of her financial prospects relative to his own. When the treasure is lost, they both admit feelings of relief and confess their love for each other. Mary Morstan does receive a chaplet and 12 valuable pearls from Thaddeus Sholto.

She died at an unspecified point between "The Final Problem" and "The Adventure of the Empty House", and her passing is touched on briefly by Sherlock in the latter. Watson's status as a widower occasionally colours his later accounts of his friend's remarkable deeds.

Mary Morstan was portrayed by Jenny Seagrove in the feature-length episode The Sign of Four of the Granada-produced ITV series of Sherlock Holmes. Unlike her Canon counterpart, she never becomes Watson's spouse following the events of the episode, and is thus never referred to as Mary Watson.

In 2014, she was introduced in the BBC televised version of Sherlock in "The Empty Hearse", in which she is portrayed by Amanda Abbington, the (then) real-life partner of Martin Freeman, who plays Watson in the series. This version also married Watson in "The Sign of Three". She is eventually killed off in "The Six Thatchers" of Series 4, some months after having given birth to John Watson's baby. 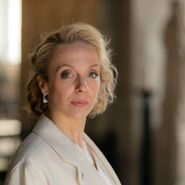