This page is for the film. For the Sherlock (2010) character see Mr Holmes (Carlton). 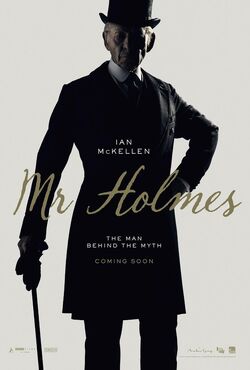 Mr Holmes is the film adaptation of Mitch Cullin's book, A Slight Trick of the Mind. It is directed by Oscar winner Bill Condon and stars Ian McKellen as Sherlock Holmes and Laura Linney as his housekeeper, Mrs Munro (each actor's second collaboration with Condon, after 1998's Gods and Monsters and 2004's Kinsey, respectively). The screenplay is adapted by Jeffrey Hatcher,[1][2] and is released on 6 August 2015.

In 1947, Sherlock Holmes, long retired, lives in a sleepy Sussex village with his housekeeper, Mrs Munro, and her amateur-sleuthing son, Roger. But far from living out a peaceful retirement, he is haunted by an unsolved case from fifty years ago. He remembers only fragments: a confrontation with an angry husband, a secret bond with his beautiful but unstable wife.

With his legendary mental powers on the wane, and without his old sidekick Watson, Holmes is faced with the toughest case of his life — a case that might finally reveal to him the mysteries of the human heart.[3]

In 1947, an aged Sherlock Holmes returns to England after a trip to Japan, where he travelled to collect a specimen of prickly ash. Arriving at his home near Cuckmere Haven in Sussex, he is greeted by his housekeeper, Mrs Munro, and her son, Roger. He notices that some of his bees have died in his absence, and also that Roger has been in his study; however, when he confronts Roger about this, he is impressed by his intelligence and perceptiveness.

Holmes' physician, Dr Barrie, visits him for an examination. He suggests that Holmes move to an apartment in town on account of his deteriorating health, but Holmes refuses. The doctor also gives Holmes a diary and instructs him to make a note every time he forgets something, to keep track of his senile lapses. Holmes begins adding the prickly ash to his food in the hope that it will improve his memory, replacing royal jelly which he had previously been using for the same purpose.

In Japan, Holmes is greeted at Tokyo Station by Tamiki Umezaki, an admirer with whom he has been corresponding regarding bees; Umezaki informs Holmes that he has had his book on bee-keeping for twenty years. At Umezaki's house they discuss Holmes' search for the prickly ash, but Umezaki tells him that they will have to take a two-day journey by train to reach a place where it grows. He tells Umezaki that he needs it urgently, as he is trying to finish writing a story.

Thirty years earlier, following the end of the Great War, Holmes is living alone in his Baker Street rooms after Watson's marriage. He receives a client, Thomas Kelmot, who is concerned about his wife, Ann. She had become distraught following two miscarriages, and became obsessed with the glass armonica and began taking daily lessons with a Madame Schirmer. After Mr Kelmot heard her calling out the names of her dead children during a session, he forbade her from taking further lessons: however, shortly afterwards received bills from Madame Schirmer for three more lessons, which Ann denied having taken. He also followed his wife to Madame Schirmer's rooms, where he heard her playing the armonica, but when he went inside Madame Schirmer denied his wife was there and Ann denied visiting the woman. Mr Kelmot insists that Madame Schirmer has dangerous ideas and is taking advantage of his wife's mental state for an unknown reason, and asks Holmes to take the case. Holmes agrees, but asks him to identify his wife's perfume.

Holmes begins tracking Mrs Kelmot. He follows her into the building where Madame Schirmer gives her lessons in an attic room, but sees her exit through the side into a small garden below Madame Schirmer's window, from which armonica music is coming. From upstairs, he hears Mr Kelmot arguing with Madame Schirmer. Holmes persuades her to allow them in to look around, and she proves his wife is not there: the music was being played by a young boy. After Kelmot leaves Madame Schirmer tells Holmes that Ann has not visited for weeks, and Holmes confirms she is telling the truth as there is no sign of Ann's perfume in the room. He realizes that Ann has been paying for the boy's lessons, and muses that the armonica was thought to communicate with the dead. Leaving the building, he finds Mrs Kelmot outside staring into the window of a taxidermy shop.

Back in 1947, Mrs Munro tells Roger that she's received news from her sister that there is an opening for a housekeeper at a hotel in Portsmouth that might suit her. Roger is upset at the news. She also informs Holmes of her interest in the job.

Holmes falls asleep, and remembers In Japan, Holmes and Umezaki arrive in Hiroshima. They travel to the blasted ruins of the Shukkei-en garden in the center of the city, and Holmes is horrified by the blackened wasteland of the city.

Holmes and Roger go to bathe in the sea, and Roger asks Holmes about the story he is writing. Holmes says that he is trying to remember the case, describing how after his brother Mycroft's death a few months back, the Diogenes Club asked him to collect his belongings. These included a collection of Dr Watson's published stories, among them one his write-up of the Kelmot case which he had called "The Adventure of the Dove Grey Glove". Although Holmes can no longer remember the case, the ending felt wrong. After seeing the film adaptation, Sherlock Holmes and the Lady in Grey, Holmes is even more certain John changed the ending, which resolves the plot by accusing Madame Schirmer of driving Ann Kelmot mad via the lead in her armonica crystals; absorbed through the skin, it would cause insanity and eventually death. The fictional Holmes has the woman arrested and saves Ann. Holmes tells Roger that Madame Schirmer had no motive, and that he is determined to remember how the case actually ended before he dies.

It is executive produced by Aviv Giladi, and was expected to start filming in the UK in April, 2014.[4] 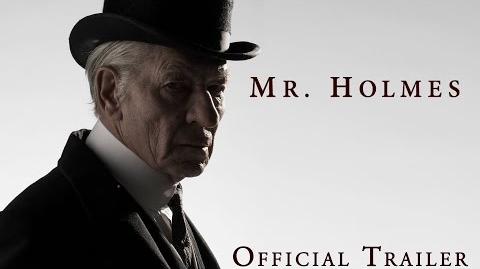