This is an article about the modern-day location. For the police force and location as it was in the time of Sir Arthur Conan Doyle, see Scotland Yard. 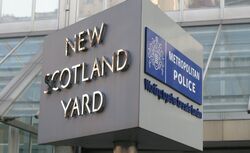 "The number of comments on this post caused my blog to crash, so I've had to delete them. If you want to know what people had to say, visit Scotland Yard, where apparently a print-out is framed in the canteen."
―'Sherlock Holmes Baffled', The Blog of Dr John H. Watson

Sherlock Holmes often consults with the Scotland Yard police force on cases, acting under the unique title of consulting detective. The different police offices treat Sherlock with different levels of contempt; some simply unwilling to work with him, others, like Donovan, showing a dislike bordering on hatred by referring to him as a freak. Lestrade seems to be one of the only members of the police force who respects Sherlock.

New Scotland Yard has been mentioned on numerous occasions in Elementary. Sherlock Holmes worked here with his mentor Inspector Gareth Lestrade before his descent into drug taking and subsequent move into rehab and to New York.

Thomas Gregson mentions that after the 9/11 attacks he was sent over to London to observe how New Scotland Yard operate counter-terrorism, which is where he met Sherlock who was, at the time, working homicide.

In the season two premiere, Sherlock returns to London to work on a case that involves Lestrade.