In London in 1890, Sherlock Holmes and Dr John Watson race to prevent the ritual murder of a girl by Lord Blackwood, who has killed five other people in a similar manner. They are able to stop the murder just in time before Inspector Lestrade and the police arrive to make the arrest.

Three months later, Blackwood is sentenced to death and requests to see Holmes, who visits him in prison. He warns Holmes of three more impending deaths that will cause great changes to the world. Blackwood is hanged and pronounced dead by Dr Watson. Holmes receives a surprise visit at 221B Baker Street from Irene Adler, a professional thief and his former lover, who asks him to find a missing man named Reordan. After her departure, Holmes discreetly follows her as she meets with a man, her secret employer, hidden in the shadows of a carriage. The concealed man states that Reordan is the key to Blackwood's plans.

Three days later, Blackwood's tomb is destroyed from the inside out. Reordan is found dead inside Blackwood's coffin. A grounds-keeper claims to have seen Blackwood walking from the tomb.

Following a series of clues from the body, Holmes and Watson find Reordan's home and discover experiments attempting to merge science with magic. Two men suddenly walk into the room preparing to burn the evidence only to find Holmes and Watson there. Dredger, a thug walks in and a fight begins. Watson fights the two men while Holmes battles Dredger. The fight stops for a time after Holmes grabs a shock baton and shocks Dredger into a closet. Being fazed by the baton several times, Dredger flees with Holmes chasing after him with a charged baton. Finding Dredger in a ship warf, Holmes is then chased around the under construction ship hull with Dredger using a large sledgehammer. Missing Holmes a few times he ends up damaging the support struts on the ship. Seeing Holmes hiding in between the tracks, Dredger decides to crush Holmes with the ship by breaking the winch hold the ship still. This causes the ship to quickly slide into the bay taking an anchor spool with it. Watson saves Holmes from the broken winch before it hits him.

Later, Holmes is taken to the Temple of the Four Orders, an occult-dabbling secret society. The leaders, Sir Thomas Rotheram and Home Secretary Lord Coward, ask Holmes to stop Blackwood, a former member of the Order. Sir Thomas and another senior member of the group are later killed through apparently supernatural means by Blackwood, allowing him to assume control. He plans to push for Britain to retake the United States, weakened by civil war. Lord Coward, who was in league with Blackwood all along, issues a warrant for Holmes' arrest.

When Holmes learns he is wanted by the police he goes into hiding and studies Blackwood's rituals, concluding the next target is British Parliament. Holmes tricks Lord Coward into revealing that the plan is to wipe out the House of Lords and then rejoins Adler and Watson. The three sneak into the sewers beneath Parliament and discover a machine, based on Reordan's experiments, designed to release a cyanide derivative into the Parliament chambers. They fight off Blackwood's men, and remove the cyanide containers from the machine.

Adler grabs the cylinders and races away, pursued by Holmes. Blackwood and Coward realise their plan has failed. Coward is captured but Blackwood manages to escape. Holmes confronts Adler on top of the incomplete London Bridge but is interrupted by Blackwood. Holmes tricks him into becoming entangled in the ropes and chains, hanging over the Thames while Holmes recounts the technical trickery behind all of Blackwood's supposed magic. A loose beam falls off the rafter supports, causing Blackwood to fall catching his neck around a chain and hanging himself.

Adler explains that her employer is Professor James Moriarty, warning that he is every bit as intelligent as Holmes but far more devious. Later, the police report to Holmes and Watson that a dead officer was found near Blackwood's device. Professor Moriarty used the confrontations with Adler and Blackwood as a diversion while he took a key component from the machine. This prompts Holmes to accept the new case whilst refusing an offer to name his own fee.

Producer Lionel Wigram remarked that for around ten years, he had been thinking of new ways to depict Sherlock Holmes. "I realised the images I was seeing in my head [when reading the stories] were different to the images I’d seen in previous films." He imagined "a much more modern, more bohemian character, who dresses more like an artist or a poet", namely Henri de Toulouse-Lautrec. Wigram wrote and John Watkiss drew a 25-page comic book about Holmes in place of a spec script.[2]

In March 2007, Warner Bros. chose to produce the film, seeing similarities in the concept with Batman Begins. Sir Arthur Conan Doyle's estate had some involvement in sorting out legal issues, although the stories are in the public domain in the United States. Neil Marshall was initially set to direct,[3] but Guy Ritchie signed on to direct in June 2008.[4]

As a child at boarding school, Guy Ritchie and other pupils listened to the Holmes stories through dormitory loudspeakers. "Holmes used to talk me to sleep every night when I was seven years old," he said.[5] Therefore, his image of Holmes differed from that in prior films. He wanted to make his film more "authentic" to Doyle,[6] explaining, "There's quite a lot of intense action sequences in the stories, [and] sometimes that hasn't been reflected in the movies."[7] Holmes' "brilliance will percolate into the action", and the film will show that his "intellect was as much of a curse as it was a blessing".[8] Ritchie sought to make Sherlock Holmes a "very contemporary film as far as the tone and texture", because it has been "a relatively long time since there's been a film version that people embraced".[7]

Filming began on 1 October 2008.[9] The crew shot at Freemasons' Hall and St Paul's Cathedral, as well as in the catacombs under London's East End.[10]

Filming was done in Manchester's Northern Quarter, while the Town Hall was used for a fight scene (which required smashing stained glass windows).[11] They shot the opening scene for three days at St Bartholomew-the-Great church in London,[2] and shot on the river Thames at Wapping for a scene involving a steamboat on 7 November.[12] Filming continued at Stanley Dock and Clarence Dock in Liverpool.[13]

In late November 2008, stunt man Robert Maillet was filming a fight scene at Chatham Dockyard in Kent, and accidentally punched Robert Downey Jr. in the face, causing Downey to be bloodied and knocked down, but not knocked unconscious as originally reported.[14] When filming at St John's Street in December, the schedule had to be shortened from 13 to nine days because locals complained about how they would have always have to park cars elsewhere during the shoot.[15]

Ritchie wanted his Holmes' costume to play against the popular image of the character, joking "there is only one person in history who ever wore" a deerstalker. Downey selected the character's fedora. The director kept to the tradition of making Holmes and Watson's apartment quite messy, and had it decorated with artefacts and scientific objects from the continents they would have visited.[17]. 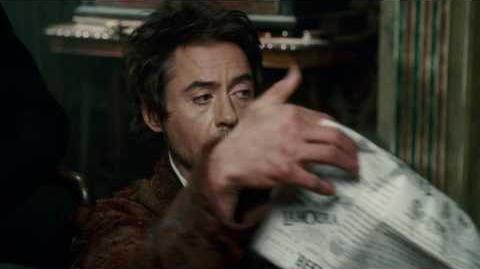