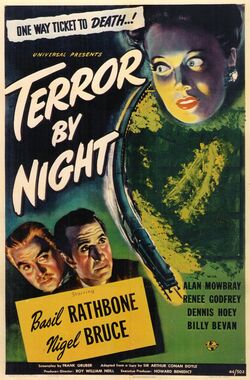 Holmes, Watson, and Watson's friend Major Duncan Bleek meet Inspector Lestrade on a speeding train to Scotland Yard. Lady Margaret Carstairs and her son, Roland, give Holmes a diamond to guard: The Famous Diamond of Rhodesia. At dinner, Roland is killed by poison, as deduced by Holmes. Holmes, Watson, Bleek, and Lestrade then question everyone on the train, as it is possible that one of them is the murderer. The diamond is stolen. Holmes then figures out that there is a coffin on the train (brought in by a woman named Vivian, who is a suspect), and that there is a secret compartment in it. However, there is no diamond inside. He also deduces that one of the people on the train is his nemesis, Colonel Sebestain Moran. Afterwards, Holmes is nearly killed after he is pushed off the train by an unknown person. A train guard is then killed and another is knocked out by Moran's henchman, Sands, who is double-crossed into getting the diamond and killed (with a poison dart, which is what killed Roland) by Bleek who is really Colonel Moran. Holmes and the gang attacks them, and the police come, ready to arrest Moran and Vivian (who was also involved because she brought Sands in the coffin). Just then, all of the lights turn off. Watson turns them back on, and when he does, Moran is captured by the police with his coat over his head. Outside, the "Moran" is revealed to be Lestrade, who arrests the false police who were going to make a getaway with Moran. The real Moran will be arrested soon, and Holmes pulls out the diamond and shows it to Moran.

Retrieved from "https://bakerstreet.fandom.com/wiki/Terror_by_Night?oldid=49268"
Community content is available under CC-BY-SA unless otherwise noted.