"The Adventure of the Greek Interpreter"

On a summer evening, while engaged in an aimless conversation that has come round to the topic of hereditary attributes, Doctor Watson learns that Sherlock Holmes, far from being a one-off in terms of his powers of observation and deductive reasoning, in fact has an elder brother whose skills, or so Holmes claims, outstrip even his own. As a consequence of this, Watson becomes acquainted with the Diogenes Club and his friend's brother, Mycroft Holmes.

Mycroft, as Watson learns, does not have the energy of his younger brother and as a consequence is incapable of using his great skills for detective work:

"If the art of the detective began and ended in reasoning from an arm-chair, my brother would be the greatest criminal agent that ever lived. But he has no ambition and no energy. He will not even go out of his way to verify his own solution, and would rather be considered wrong than take the trouble to prove himself right."
―Holmes talking about his brother, Mycroft.

In spite of his inertia, the elder Holmes has often delivered the correct answer to a problem that Sherlock has brought to him. On this occasion, however, it is Mycroft who has need to consult Sherlock. Mr Melas, a Greek interpreter and neighbour of Mycroft, tells of a rather unnerving experience he has recently gone through.

Melas was called upon one evening by a man named Harold Latimer to go to a house, supposedly in Kensington, to do some translation in a business matter. On the way there in Latimer’s coach, Melas noticed that the windows were papered over so that he could not see where he was. Latimer also produced a bludgeon, laying it beside him as an implied threat. Melas protested, saying that what Latimer was doing was unlawful. The kidnapper replied that he would make it up to Melas, but also threatened him with unspecified retribution should the evening’s business ever be made public.

For approximately two hours they rode, at last arriving at a house. It was dark, and Melas only got a general impression of a large lot as he was hustled out of the coach and into the house. The house itself was poorly lit, but Melas made out that it was quite big. In the room into which he was led by Latimer and another, nervous, giggling gentleman, whose name is later discovered to be Wilson Kemp; Melas noticed a deep-pile carpet, a high marble mantel, and a suit of Japanese armour.

Another man was brought into the room. He was thin and emaciated and had sticking plaster all over his face, notably a big piece sealing his mouth. Melas knew then that things were not right. Melas was sly enough to observe that his kidnappers were utterly ignorant of Greek, and used this to find out some information. While Latimer and his giggling companion had Melas translate demands that this man sign some papers, Melas added his own short questions to the dialogue. The man not only answered Latimer that he would never sign these papers, but he also answered Melas that his name was Paul Kratides, that he had been in London for three weeks, that he had no idea what house he was in, and that his captors at the house were starving him. He wrote all his answers, unable as he was to speak through the sticking plaster.

Much could be inferred from Kratides’s answers to Latimer, too. Evidently, Latimer was trying to coerce Kratides into signing over property to him, and a woman was also involved. Latimer had warned Kratides that his obstinacy would do her no good.

Melas would have extracted the whole story from this stranger had the woman herself not burst in unexpectedly, but even that event furnished new information. She recognized Kratides as “Paul”, whereupon he managed to get the plaster off his mouth and he called her “Sophy”. They both behaved as though neither had expected to see the other. 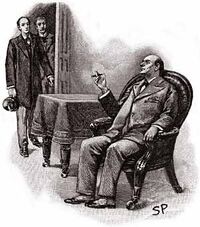 Melas was ushered back into the coach for another interminable ride and was deposited far from his home on Wandsworth Common. He made it to Clapham Junction just in time for the last train to Victoria. He has now presented his story at the Diogenes Club to Mycroft, who asks his brother Sherlock to look into it.

An advertisement has already been placed begging the public for information. It yields a result. A Mr Davenport knows the woman in question, and she is currently residing at the Myrtles, a house in Beckenham. Sherlock Holmes and his brother Mycroft, who received the message from Davenport, decide that they must go to Beckenham to see about this. Watson comes, too, and they decide to pick up Inspector Gregson, and Melas as well in case some translating needs to be done. They find, however, that he has already been picked up, by a nervous, giggling man brandishing a bludgeon. Holmes knows that this means trouble. Obviously the thugs know that Melas has betrayed them, and plan to silence him.

After the necessary legal procedures for securing a warrant have been completed, the group proceeds to Beckenham only to discover that the house, which indeed turns out to be as Melas has described, has been abandoned. Tracks advertise that a fully loaded coach has recently pulled out of the drive. Breaking in, they discover Melas and Kratides bound in a closed room where some charcoal has been lit to gas the two of them. Kratides is dead, but Melas recovers thanks to Watson's timely intervention.

Apparently, Kratides never signed any papers. It turns out that Sophy’s friends contacted Kratides, who was Sophy’s brother, in Greece to tell of what they thought was a bad situation for her with Latimer. He then came to England and wound up in Latimer’s power. He tried to force Kratides to sign over his sister’s property, and he refused absolutely.

All that is ever again heard of the thugs Latimer and Kemp is a news story from Hungary saying that they have both been stabbed to death. The official report says that it was a fight between the two of them. However, Holmes thought that perhaps Sophy has had her revenge on them and somehow having managed to bring their fate about.

Retrieved from "https://bakerstreet.fandom.com/wiki/The_Adventure_of_the_Greek_Interpreter?oldid=57689"
Community content is available under CC-BY-SA unless otherwise noted.