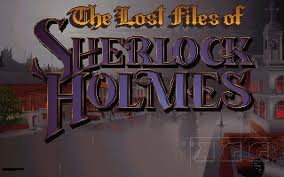 The Lost Files of Sherlock Holmes is an adventure game series developed by Mythos Software and published by the American computer game company Electronic Arts.

Note: This is a generic section stub. You can help Baker Street Wiki by expanding it.

Note: This is a generic section stub. You can help Baker Street Wiki by expanding it.

The following characters appear in The Lost Files of Sherlock Holmes (1992).

Sherlock Holmes
The main character, controlled by the player. Despite that, and perhaps unsurprisingly, no background information on him or his past is ever given in dialogue. He begins the story in his messy apartment in Baker Street 221B.
John Watson
He spent his early days in Australia. As a student, he had modest success playing with the Blackheath Football Club. He had his tour of duty in the Indian subcontinent and participated to the second Afghan war where he took a Jezail bullet. The character of Watson follows the player in every screen and can make some appropriate comment.
Wiggins
A cunning and perspicacious boy, the leader of the Baker Street Irregulars, a crew of street urchins. He is assigned by Holmes to locate the flower seller with dyed flowers. He fetches Holmes a past issue of the Times, and later he sells Holmes the gyroscope Watson bought him last Christmas.
Inspector Lestrade
Scotland Yard inspector. There is some tension between Holmes and Lestrade, especially since Holmes criticized Lestrade's handling of the Collins Bungalow murder. He investigates the murder of Sarah Carroway, believing it is one more victim by Jack the Ripper. He is found at the Scotland Yard, harried and preoccupied (he even works in his shirt sleeves) having given orders not to be disturbed by anyone. However he does give Holmes authorization to access Carroway's items in the morgue.
Tobias Gregson
He is investigating a suicide of a woman leaping off London Bridge. He is seen in the Southwark Morgue complaining that Lestrade gets all the important cases; he gives Holmes authorization to enter the Scotland Yard building. Afterwards he is seen in the Zoological Garden investigating the murder of Frederick Gardner.
Old Sherman
A thin, hunched, lean and wizened old man. He wears gold framed spectacles perched on his almost bald head. He has an elephant folio of Audubon's "The Birds of America" and Betheir's exhaustive history of embalming and taxidermy. He owns several animals, his most prized treasure being Toby.
Toby
Holmes' canine friend, an ungainly brown and white, long-haired, floppy-eared, spaniel-greyhound mongrel. He has the reputation of being the best tracking dog in England and is kept by Old Sherman. He is employed by Holmes in order to locate George Blackwood at the Surrey docks.

Chloe
An elephant in the Regent's Park Zoo, born in 1856.
Felix
A famous lion in Regent's Park. Originating from British East Africa where he was captured as an infant. His offspring populate the zoos in Europe and the USA.

Retrieved from "https://bakerstreet.fandom.com/wiki/The_Lost_Files_of_Sherlock_Holmes?oldid=47151"
Community content is available under CC-BY-SA unless otherwise noted.