"Alone is what I have. Alone protects me."
―Sherlock Holmes

"The Reichenbach Fall" is the third and final episode of the second series of the TV show Sherlock. It was first broadcast on 15 January, 2012 on BBC One.

Jim Moriarty possesses the greatest criminal mind that the world has ever seen. Sherlock and John knew he would not stay hidden for long. Even they, however, never guessed the sheer scale and audacity of the crime that would propel Moriarty back into the headlines. The crime of the century. The Tower of London, the Bank of England and Pentonville Prison – all sprung open on the same day, as if by magic! But Moriarty's plans do not stop there...

Sherlock locks horns with his old enemy in one final problem that tests loyalty and courage to their very limits. Sherlock must fight for his reputation, his sanity and his life. But is he all he claims to be?

The episode opens with John Watson in his first meeting with his therapist for eighteen months. He struggles to explain the reason for the impromptu visit, but eventually chokes out the words, "My best friend, Sherlock Holmes, is dead". The episode then flashes back to three months earlier, with Sherlock receiving plaudits and gifts from various people for whom he has solved cases, along with much unwanted media attention.

Meanwhile, Moriarty has been freed from Mycroft's prison and proceeds to break into the Tower of London, where the Crown Jewels are kept, while simultaneously opening the vault at the Bank of England and unlocking all the cells at Pentonville Prison via his mobile phone. Before smashing the Crown Jewels' case, he writes the words "Get Sherlock" in reverse on the outside, to be seen by the security cameras. He then allows himself to be caught wearing the jewels and sitting on the throne.

Sherlock is called to testify at Moriarty's trial. Sherlock explains to the court that Moriarty is a criminal mastermind, a criminal for hire. During the trial Moriarty does not speak a word and does not even mount a defence. Even though he did not mount a defence against the charges and the Judge himself recommends Moriarty be found guilty, Moriarty is acquitted due to having threatened each of the families of the jury. After being acquitted, Moriarty visits Sherlock at his home and explains that he has plans for Sherlock. Meanwhile, John is summoned to see Mycroft, who explains that a number of professional assassins have moved into flats on 221B Baker Street, and asks him to watch out for Sherlock.

Sherlock and John investigate a kidnapping of the US Ambassador's children, which is a carefully orchestrated plot by Moriarty to implicate that Sherlock has been staging all of his cases himself. Lestrade arrests Sherlock, but Sherlock escapes with John. They also realize Moriarty's "Get Sherlock" has convinced the criminal underworld that Moriarty has given Sherlock the computer code he used to pull off his triple heist, and that it can bypass all security systems. A trail of bodies follow Sherlock as professional assassins fight over access to him.

They break into the house of a journalist poised to publish an expose on Sherlock. There, they discover that Moriarty has developed a fake identity, Richard Brook, who is supposedly an actor that Sherlock paid to pretend to be a master criminal. Now a wanted man with the papers ready to print the expose, based on Richard Brook's testimony, Sherlock launches a final gambit. Leaving John, Sherlock contacts Molly at the hospital, and, responding to an earlier conversation they had, admits he needs her help. John goes to Mycroft's office to question him, and learns that Mycroft divulged Sherlock's personal information during interrogations of Moriarty. Meanwhile, Sherlock deduces that the anti-security program was encoded in the tapping of Moriarty's finger during his earlier visit.

John finds Sherlock at the Barts lab, but leaves again after hearing Mrs. Hudson has been shot. Sherlock texts Moriarty, who meets him on the roof of the hospital, and claims that with the code he can erase Richard Brook electronically. Moriarty reveals that there is no code as the tapping is really a Bach tune and that Sherlock must commit suicide to complete his plan. Ready to do so, since otherwise Moriarty's assassins will kill John, Mrs Hudson and Lestrade, Sherlock realises that Moriarty has some sort of fail-safe and can call the killings off. Sherlock then convinces Moriarty that he would be willing to do anything to make him activate the fail-safe, so Moriarty kills himself after acknowledging commonality between him and Sherlock.

With no way to use the fail-safe, Sherlock calls John, who is rushing back from 221B Baker Street, after having found the report of Mrs Hudson's shooting false. Claiming that he was always a fake and explaining that this last phone call is his "note", Sherlock throws himself from the roof of St. Bartholomew's as John looks on from the street. After being knocked to the ground by a cyclist, John watches as Sherlock's crumpled and bloody body is carried away by hospital staff.

The episode returns to Watson's meeting with his therapist, but he is unable to open up. Later he visits Sherlock's grave with Mrs Hudson. While standing in front of his gravestone, he reaffirms his faith in Sherlock, and begs him not to be dead. From the shadows, Sherlock looks on silently as John walks away.

"Because I owe you a fall, Sherlock. I. Owe. You."
―Jim Moriarty

Molly: "What did you mean I owe you? You said I owe you. You were muttering it while you were working."
Sherlock: "Nothing. Mental note."
―Molly Hooper and Sherlock Holmes

I.O.U. is a recurring theme during this episode. It is spoken aloud by several characters, including Jim Moriarty, Sherlock Holmes, and John Watson and is also seen appearing in the background. It refers to Moriarty's promise to Sherlock that he will make him "fall".

The "I O U" motif appears in physical form three times during the episode. The first is in an apple that Moriarty carves and leaves at Baker Street, the second is spray-painted in three windows across from New Scotland Yard offices, and the third is graffitied on the street outside the 221 Baker St. street address. They are threats pertaining to certain individuals connected to those three locations, as Moriarty reveals on the roof of St. Bartholomew's Hospital at the end of "The Reichenbach Fall".

The last time the motif appears in the episode is at the end, during the graveside scene. John Watson says, "I was so alone, and I owe you so much." 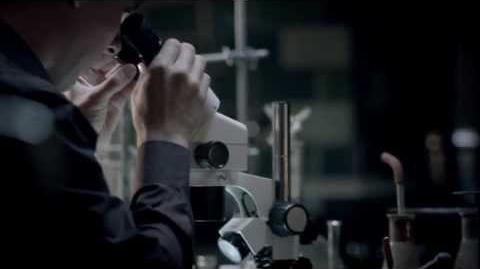 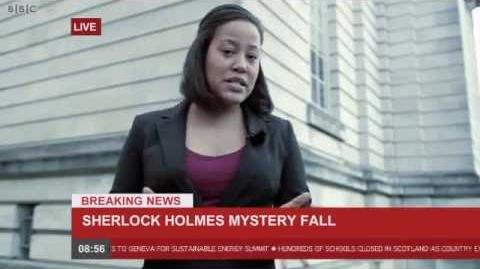 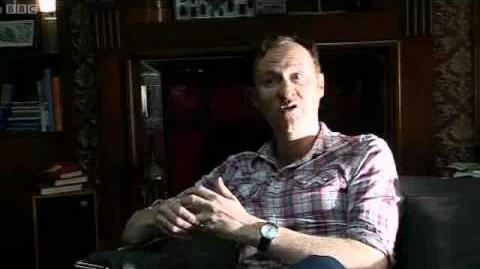