"The Sign of Three" is the second episode of series three of Sherlock. It was written by Steve Thompson, Steven Moffat and Mark Gatiss.

Sherlock faces his biggest challenge of all – delivering a Best Man's speech on John's wedding day! But all is not quite as it seems. Mortal danger stalks the reception – and someone might not make it to the happy couple's first dance. Sherlock must thank the bridesmaids, solve the case and stop a killer!

The episode opens with Greg Lestrade investigating a series of bank robberies, however the robbers always seem to know just before the police turn up. He gets increasingly frustrated with each new incident, but finally the police force manage to corner the gang. As he is moving in, Sherlock texts him urgently for help at Baker Street. Lestrade abandons the arrest and sends police units Sherlock's house, only to find that the help needed was with writing a best man's speech.

Mrs Hudson then speaks to Sherlock about the big day coming up: John's wedding to Mary. We see a man getting ready for the occasion: James Sholto, John's old army commander. After the ceremony, John and Mary leave the church, and a photographer takes their picture. Sherlock interrogates all of Mary's male friends to see the likelihood of infidelity, causing one of them to very carefully keep his distance from Mary after Sherlock had warned him to do so.

The reception begins and John thanks Sholto for coming. Sherlock begins his speech, and is lost for words, and we flash back to John preparing to ask Sherlock for the honour of being best man. Sherlock remembers the telegrams, and begins to read them out. One is from Mike Stamford, another from Cam, who wished Mary's family was around to see the wedding. Sherlock rattles through the rest of the telegrams and then recounts the story of John asking him to be best man. He claims to have gone through a range of emotions before expressing his gratitude, then admits that he'd not said anything out loud.

Sherlock then goes about insulting most of the guests and ridiculing the institution of marriage. He says this shows what an arsehole he is, and how good a man John Watson is to consider Sherlock his best friend. He also sincerely congratulates them both, and says that Mary deserves as good a man as John. The guests begin to cry, just as Sherlock launches into his funny stories about John. He brings up John's blog, and recounts the cases of The Hollow Client, The Poison Giant, The Matchbox Decathlete, and The Elephant in the Room.

He then picks the case of the Bloody Guardsman to explain in full detail – Stephen Bainbridge, a royal guardsman, contacts Holmes when he believes he has a stalker. The pair investigate, trying to speak to Bainbridge, but soon discover him dead, stabbed in a locked shower. While investigating the body, Watson sees he is still alive and saves his life. Sherlock recounts how he is all about solving the mystery, whereas John is all about saving peoples' lives.

Lestrade and Tom attempt unsuccessfully to guess how the murder was done, and Sherlock explains he never solved it. He then moves onto the story of John's stag night, where he calculates exactly the right amount of alcohol to consume in order to have the perfect evening. However, John sneakily adds extra shots to their drinks, throwing off Sherlock's careful calculations and causing them to get drunk and almost get into a fight.

They go home and start playing a game of Celebrity Heads. Sherlock has his own name on his head, and much to Watson's amusement, he is unable to figure this out in his inebriated state. A client, Tessa, then enters and tells them she believes she has been dating a ghost. Holmes and Watson are still quite drunk and are prone to giggling and nodding off while she tells her story. They agree to accompany her to the flat where she had last seen her date. Sherlock, whose usual super-human deductive abilities have been reduced to looking at a chair and thinking "sitty thing?", flops over and vomits while trying to inspect the floor for clues. The landlord, disgusted, has them arrested.

An amused Lestrade gets them out of prison the next day, and Sherlock begins investigating the ghost date. He speaks to other women who say they have dated the ghost, and he deduces that it is a man using recently deceased men's flats and identities to meet women. He comments that he is less of a ghost and more of a mayfly, as he lives for just one day. He tries to find the common connection between the women but cannot see it. He gives up, and back at the wedding finishes his speech. However when the photographer takes a snap of him, he drops his glass and realises that Tessa knew John's middle name, and after ruling out Irene Adler as a suspect realises that Tessa must have seen it on John's wedding invitation, meaning the Mayfly Man was at the wedding.

He continues his speech, working out that the man is the same person who attacked Bainbridge, and he must be here to murder someone: Sholto, the army commander who got a platoon of new recruits killed in Afghanistan. He tells Sholto he is in danger, then informs John and Mary of the danger. Sholto locks himself in his room while John, Sherlock and Mary bang on the door. Sherlock then works out that both Sholto and Bainbridge the guardsman wore the same belt, and that the belt is constricting a stiletto wound (delivered painlessly thanks to the tightness of the belt) that will only start to bleed out once the belt is removed. Sholto refuses to let them in, saying it is his time to die, but Sherlock convinces him to let John Watson treat him.

Later Lestrade brings in the wedding photographer, presumably on Sherlock's request, and it is revealed that the photographer had been the murderer; his brother had been one of the recruits under Sholto's command when the platoon was attacked.

At the wedding dance, John and Mary dance to a waltz Sherlock wrote for them. He then makes a speech, and proposes a toast to the three of them – indicating he has deduced Mary is pregnant. He apologises for letting it slip, then dons his coat, after putting on his regular outfit, and makes his way into the night, alone.

"Tonight I make my first and last vow. John and Mary, I will always be there for all three of you.. Uh... Sorry miscounted. Turn the music back on. Come on, everybody; dance!"
―Sherlock tries to cover his blunder
"When John first approached me about being the best man, I'll admit I was confused. I expressed to him that it took me by surprise. I told him that I would none-the-less try my best at a task I found daunting, and implication that I was almost... moved by this. It later transpired that I had said none of this outloud."
―Sherlock explains his reaction to being asked to be best man as the flashback shows him completely stunned.
"Any rumors of intellectual superiority I have are due to the selfless contrast John provides. I believe their is a certain analogy there, as brides tend to favor plain bridesmaids at their weddings. And after all contrast is God's plan to enhance the beauty of his creation. Or it would be if God were not a ludicrous fantasy designed to provide a career opportunity for the family idiot."
―Sherlock accidentally insults several people, including a preist
"The point I am trying to make is that I am... the most rude, ignorant and all-around obnoxious arsehole anyone could have the misfortune of knowing. I am dismissive of the virtuous, ignorant of the beautiful and uncomprehending of the happy. So when I was confused about being asked to be best man, it was because I never expected to be anyone's best friend. Certainly, not to the warmest and wisest human being I have ever had the pleasure knowing. John, as I am apparently your best friend, I cannot congratulate you on your choice of bride. ...Actually now I can. Mary, when I say you deserve this man, it is the highest compliment of which I am capable. John, I'm sure I speak for Mary as well when I say we will never let you down and we have a lifetime ahead to prove it."
―Sherlock manages to say something touching
"He says you have some pictures for him as a treat."
"Uh, yes. If he's good."
"Beheadings."
"Lovely little village...."
―Sherlock might have just desensitized a kid. 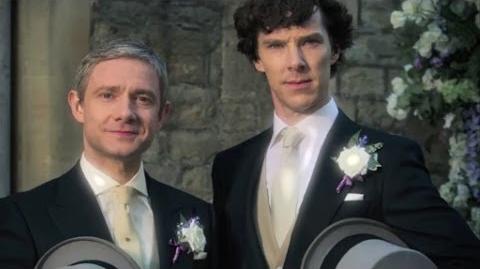 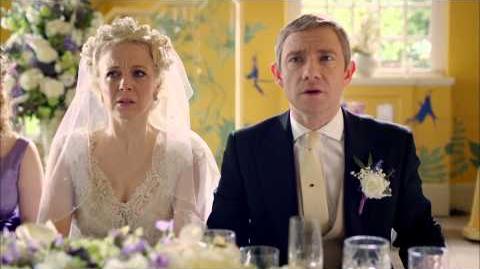 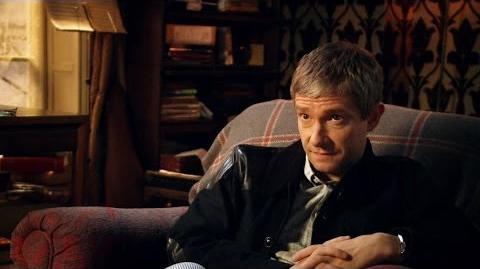 Retrieved from "https://bakerstreet.fandom.com/wiki/The_Sign_of_Three?oldid=61753"
Community content is available under CC-BY-SA unless otherwise noted.