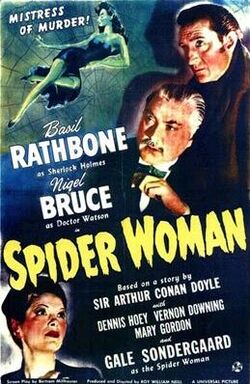 The Spider Woman is a 1944 film directed by Roy William Neill. It is the seventh film to star Basil Rathbone as Sherlock Holmes and Nigel Bruce as Dr John Watson.

Sherlock Holmes investigates a series of so-called "pajama suicides". He knows the female villain behind them is as cunning as Moriarty and as venomous as a spider.

Retrieved from "https://bakerstreet.fandom.com/wiki/The_Spider_Woman?oldid=45140"
Community content is available under CC-BY-SA unless otherwise noted.