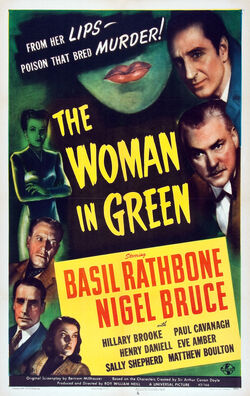 The Woman in Green is a 1945 film, the eleventh in the series of Sherlock Holmes films starring Basil Rathbone and Nigel Bruce as Holmes and Watson. The film was directed by Roy William Neill.

Influenced by Sir Arthur Conan Doyle's The Final Problem and The Adventure of the Empty House, The Woman in Green (set in the then-present day setting of 1940s London) tells of  Sherlock Holmes's final confrontation with Professor Moriarty and a seductive female hypnotist.

When Moriarty hatches another scheme, Holmes and Dr John Watson are once again called into action. The scheme is removing women's forefingers. Sir George Fenwick, after a romantic night alone with his girlfriend Lydia Marlowe is hypnotized into believing that he is responsible for removing the forefingers. He is certain that he has done it after he finds one in his pocket. His daughter comes to Holmes and Watson (she doesn't know that a man is following her, which Holmes discovers when he sees a taxi following her. However, the person inside sees him and parks at an empty house.), and tells them that she found her father putting a forefinger under a pile of soil.

Fenwick is then found dead. Holmes believes that Moriarty is responsible for the crimes. Watson is then called to help a woman who fell over while feeding her pet bird. He exits mumbling to himself that there should be a law against fat people keeping birds. Minutes later, Moriarty appears and explains that he called Watson so he could talk to Holmes and make him believe he is holding Watson hostage so he'll let him stay. He then leans one of the chairs back. Holmes sees an open window, which is directly across the window of the empty house and the chair. He does not sit in the chair. When Moriarty leaves, Watson arrives. Holmes explains what Moriarty did and tells Watson to explore the empty house. Inside the empty house, Watson sees a sniper shoot Holmes. Holmes then appears and explains that he put a statue there because he knew as soon as he sat there, that would be the end of Sherlock Holmes. Gregson takes the sniper-an hypnotized ex-soldier- away, but he is killed a little while later on Holmes doorstep! Holmes, who now has a plan, makes friends with Lydia. She takes him to her house, where he is hypnotized. Moriarty, who is helping Lydia, tells him to jump off the building. Watson and the police then appear and grab the criminals. Holmes then reveals he wasn't really hypnotized. Moriarty then escapes from the hold of a policeman and jumps from the top of Lydia's house to another building. However, he hangs onto a pipe which becomes loose from the building, causing Moriarty to fall to his death. Holmes and Watson quietly celebrate their victory against Moriarty.

Retrieved from "https://bakerstreet.fandom.com/wiki/The_Woman_in_Green?oldid=41182"
Community content is available under CC-BY-SA unless otherwise noted.